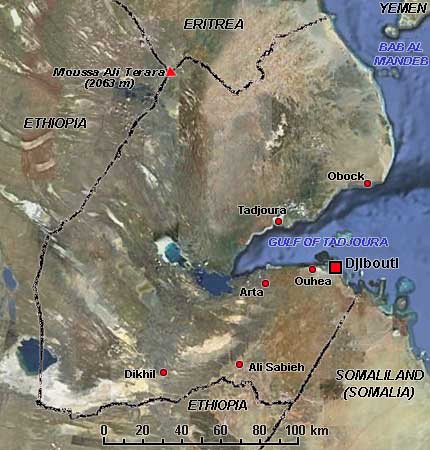 A short history of Djibouti

Djibouti is a small republic just north of the Horn of Africa on the strait of Bab el-Mandeb. It shares a border with Ethiopia, Eritrea and Somalia (or actually, since 1991, with Somaliland, a de facto independent republic, the successor state of the former British Somaliland protectorate). The country is 90% volcanic desert and minor mountain ranges extend from the coastal plain to the Ethiopian highlands: Moussa Ali, the highest point in the country on the borders with Ethiopia and Eritrea, rises to 2,063 metres. The coastline is deeply indented by the Gulf of Tadjoura. Djibouti is one of the hottest places on earth, with sparse vegetation, an average annual temperature of nearly 32 °C and an average annual rainfall of less than 125 mm.

The population is roughly divided into two groups: the Afars (formerly called Danakil) of the north and the Somali-speaking Issas of the south. Both are Muslim, and both were traditionally pastoral nomads. Tensions between the Afars and Issas was the cause of the civil war (also known as the Afar insurgency) in the early 1990s. Yemen, on the Arabian peninsula being only 20 kilometres away made for close contact for more than 1000 years; the Afar and Somali tribes in this region were among the first on the African continent to accept Islam. Djibouti also has an Arab trading community and a substantial French presence. Although Somali and Afar are widely spoken, French and Arabic are the official languages. The country's name, displayed underneath the flag on this page, is in Afar, Somali and Arabic.

French interest developed in the nineteenth century when the area was ruled by the sultan of Raheita, Tadjoura and Gobaad. The French purchased the port of Obock in 1862 and extended it until in 1894 it was declared a colony: Côte française des Somalis (French coast of the Somalis) or French Somaliland with essentially the current boundaries and with Djibouti as its capital, which was established as a city that year. The Afar and Somali sultanates (including the Sultanate of Tadjoura with whom the initial treaty had been signed) were absorbed in the colony.

In 1958, with Somalia slated for independence when former British and Italian Somaliland would join in 1960, a referendum was held to decide if the territory should join the new Somali republic or remain French. The result was in favour to remain in association with France, partly due to the yes vote by the Afar people and resident Europeans and partly due to the French expelling thousands of ethnic Somalis who were in favour of joining Somalia. In 1966 the United Nations recommended that independence should be granted to French Somaliland; French President Charles de Gaulle, who visited the territory in August 1966, had been greeted with demonstrations and riots, and ordered a second plebiscite. This was held in March 1967 and the results were the same as before, for the same reasons: Afars largely voted to remain associated with France and Issa Somalis opting for independence, to unite at a later date with Somalia. But around 10,000 Somalis had been deported before they could vote and others were prevented from voting; it was alleged that the French had even imported Afar (Danakil) people from Ethiopia, but this was denied. Even so, only a small proportion of the Somali population could vote, outnumbered by the Afars.

Shortly after the referendum was held, French Somaliland was renamed "Territoire français des Afars et des Issas", (French Territory of the Afars and Issas), to acknowledge the Afar people and downplay the Somali constituency. There was a change in government structure with a High Commissioner instead of a Governor-General and a Government Council. But it became increasingly clear that France would have to relinquish their last colonial outpost on the African continent and, when a third vote was held in 1977, a record 98.8% voted for independence. On 27 June 1977 the country became the Republic of Djibouti, with as its first president Hassan Gouled Aptidon, a Somali politician who, at the first referendum in 1958, had originally campaigned for French Somaliland to remain French! He remained in power until 1999.