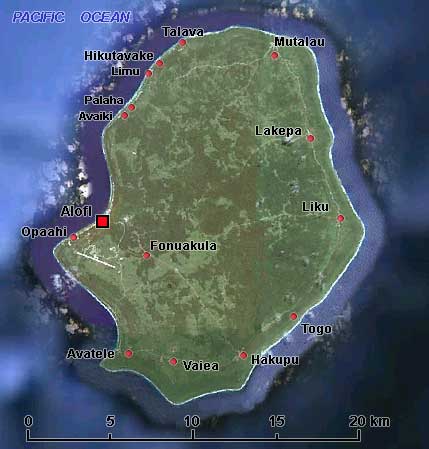 A short history of Niue

Niue, a single island, about 260 km² in the Pacific Ocean, is a raised atoll, one of the largest coral islands and one of the smallest self-governing states in the world. It is almost 400 kilometres to the east of Vava'u and almost 500 kilometres south of American Samoa. The name Niue comes from "niu" (coconut) and "e" (behold). The island was first settled by Polynesian sailors from Samoa around 900 CE; further settlers arrived from Tonga in the 16th century. The practice of kingship seems to date from around 1700, through contact with Samoa and Tonga. Captain James Cook made the first European contact with the island in June 1774 at Opaahi Reef, but was refused permission to land by the Polynesian warriors who greeted him with red stained teeth and narrowly missing him with a spear. Cook assumed they had painted themselves with blood (it was in effect a red banana) and named the island "Savage Island", a name it kept for centuries until its native name was restored. However, its official name is still Niue Fekai (wild Niue); locals often refer to it as "The Rock".

Missionaries from the London Missionary Society arrived in 1846 but were not allowed to land until Nukai Peniamina, a local man who had been taken away and trained as a pastor in Samoa, was finally admitted in Mutalau village in the north of the island. There was initial resistance to the introduction of Christianity but gradually it spread; Hakapu was the last village to be converted. The islander's reputation for ferocity had kept foreigners, like whalers, away, but after Christianity they lost their will to fight and blackbirders enticed Niuean men to work in the phosphate mines on distant Malden Island. The English missionaries exerted great influence over the island in the latter half of the 19th Century, especially Frank Lawes, who had arrived in 1868 and was regarded adviser to the islanders in all matters between Europeans and themselves. Lawes hoisted the British flag as a symbol of that and in 1889 Fataaiki, the king of Niue, wrote to Queen Victoria to ask for protection, "lest some other nation should come and trouble us". Under Lawes' influence he petitioned again in 1895 for the flag of Great Britain to fly over Niue.

The reply to both petitions was that the Anglo-German Convention did not permit any annexation by the great powers in that area of the Pacific. On 10 October 1899 King Togia wrote to the Governor of Fiji and the British High Commission of the Western Pacific with another request for Queen Victoria's protection and for a British Representative. A month later the Anglo-German Convention became void and the Samoan Convention of 14 November 1899 put Niue and other islands under the patronage of Great Britain while leaving Samoa to the Germans. Britain formally annexed Niue on 21 April 1900. However, New Zealand, under Premier Richard Seddon, had been showing an interest in the surrounding islands with a view to building an empire and was disappointed at not having been given Samoa. The British Colonial Office felt a duty to assuage his disappointment and show appreciation for New Zealand's loyalty to Britain in the South African (Boer) War and agreed for New Zealand to take over the Cook Islands and Niue.

The Niueans were unaware of this and when a parliamentary delegation arrived in 1903 King Togia and the Fono (parliament) told them they had ceded their island to Britain, not New Zealand and strongly objected to be grouped under the Cook Islands with which they had no affinity. They only agreed being under New Zealand if they had no connection with Rarotonga (Cook Islands) and on 29 September 1903 a separate administration was established, under a Resident Commissioner; Niue was now for the first time in its history under a foreign power. New Zealand's first problem was how to fit in with the existing power structure: the King and the Fono were representatives of the people, although King Togia now appointed the members instead of them being elected and the Church had indirect control. Percy Smith, sent in 1901, reconstituted the Fono as a Council of representation of the eleven villages and dismissed King Togia by presenting him with a medal. The first Resident Commissioner arrived in 1902 and organised the changes initiated by Percy Smith with the blessing of Frank Lawes. The appointed Island Council was replaced in 1959 by an elected Legislative Assembly. In 1974 a referendum was held whereby Niueans were given three options: independence, self-government or continuation as a New Zealand territory. The majority selected self-government and on 19 October 1974 Niue became internally self-governing in free association with New Zealand. Robert Rex, ethnically part European, part native, was appointed the country's first premier, a position he held until his death 18 years later.

Niue is roughly oval in shape with two large bays indenting the western coast (Alofi Bay in the centre and Avatele Bay in the south). Between these is the promontory of Halangingie Point. There are steep limestone cliffs along the coast with a central plateau rising to about 60 metres above sea level. A coral reef surrounds the island, with the only major break in the reef being in the central western coast, close to the capital, Alofi. A notable feature of the island is the number of limestone caves found close to the coast. With a tropical climate, most rainfall occurs between November and April. However, the island is prone to fierce tropical storms: after the cyclones of 1959 and the 1960s the houses became concrete block dwellings; in 1989 the coconut plantations were wiped out, in 1990 the lime and passion fruit crops were destroyed and in January 2004 Cyclone Heta killed two people and did extensive damage to the entire island. Many of Alofi's buildings were destroyed, including the hospital. After this storm government buildings in Alofi South were moved to Fonuakula, a less exposed site 3 kilometres inland from the west coast, but still within the village boundaries. Most of the island's population live close to the west coast, around the capital, and in the northwest. However, many people choose to work and eventually settle in New Zealand to which they have unhindered access: 90-95% of Niuean people now live in New Zealand. As a result the population of Niue continues to drop: it was 5,200 in 1966, about 2,200 in 2004 and about 1,400 in 2009.