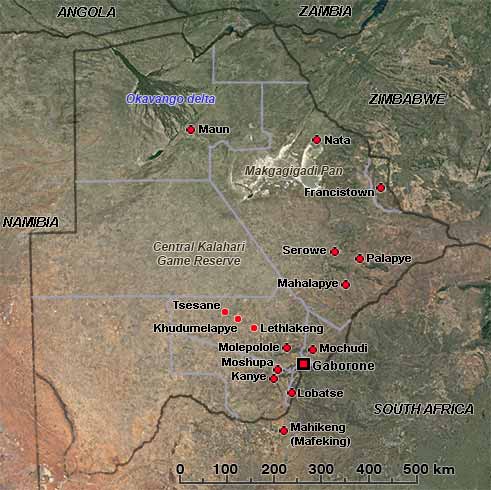 A short history of Botswana

The Republic of Botswana is a flat landlocked country in Southern Africa, with an area of 581,730 km², surrounded by South Africa, Namibia and Zimbabwe, and a very narrow border in the north with Zambia, where the easternmost point of Namibia’s Caprivi Strip almost touches Zimbabwe. It has a present population of over 2,250,000, of which almost 80% are Batswana (singular: Motswana), speaking the National language, Setswana, although the term is also used to denote all citizens of the country. In the north east is a minority of Kalanga people, related to Shona of nearby Zimbabwe and in the north west, in Maun, are a group of Herero, an ethnic group mostly living in Namibia. 3% Bakgalagadi and 3% San people (called Basarwa in Botswana and often Bushmen by the outside world) are living on the edge of the Kalahari Desert, the large semi-arid sandy savanna that takes up about 70% of the country.

Botswana has been inhabited for over 100,000 years; its original inhabitants, as in all of southern Africa, were the San (Bushmen) and Khoi peoples, hunter-gatherers speaking languages collectively known as Khoisan, distinguished by the great number of clicks in it. About a thousand years ago the Great Zimbabwe empire extended to eastern Botswana and around 1300 CE the ancestors of the present Tswana people, herders and farmers, gradually moved from what is now northern South Africa into Botswana, creating the different Tswana speaking tribes of today, living in distinct villages under tribal chiefs. In the late 19th century there were hostilities between Tswana and Ndebele (or Matabele), a people of Zulu stock that had moved into what is now western Zimbabwe and were making incursions into Tswana lands; also Dutch Boer settlers were coming in from the Transvaal to the east and German settlers were coming in from the west. Batswana leaders Khama III, Bathoen and Sebele appealed to the British Government for assistance and on 31 March 1885 the northern territory, corresponding to modern Botswana, came under direct British administration as the Bechuanaland Protectorate; to its south, across the Molopo River, the British had in 1882 recaptured two small Boer republics in the region including the town of Mafeking and on 1 September 1885 proclaimed the Crown Colony of British Bechuanaland. Ten years later this became part of the Cape Colony and it has remained part of South Africa ever since; now more Setswana speaking people live here than in Botswana.

In 1910 the Union of South Africa was formed from the main British colonies but Bechuanaland Protectorate was not included, as was also the case for Basutoland (now Lesotho), and Swaziland; these High Commission Territories remained separate, according to the wishes of the inhabitants. A proposal for democratic self-government was accepted by the United Kingdom in June 1964; until then Bechuanaland Protectorate had been administered from Mafeking (or Mafikeng, now Mahikeng) in South Africa; a new town was established in Gaborones (short for “Gaborone’s Village”, named after the chief of the Tlokwa tribe who lived nearby) and the seat of government was moved there in 1965. Elections took place and on 30 September 1966 the Republic of Botswana with its capital, now named Gaborone, became independent. The first president was Sir Seretse Khama, Chief of the Bamangwato; he was re-elected twice. Since then the country’s presidents have all been elected democratically, a shining example for many African nations. In 2008 Ian Khama, the son of the first president, was elected; his term will officially end in April 2018 and he already has announced he will then step down as president.

Botswana, one of the most sparsely populated countries in the world, is an absolute success story. Formerly one of the world’s poorest countries in the world it has transformed itself into one of the fastest-growing economies in the world, with its economy dominated by mining, cattle, and tourism. It now has the highest Human Development Index of continental Sub-Saharan Africa, is politically stable, its police force is considered the best in Africa and corruption is virtually absent. The photos shown here are of the country as it was in the early seventies; since then a lot of development has taken place, as can be seen with Google maps’ street view; but this is what the country was like just a few years after its independence.