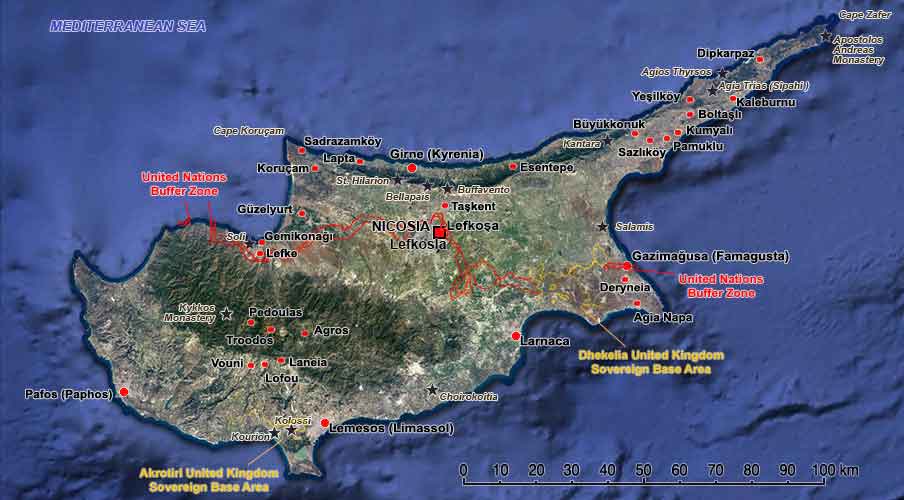 A short history of Cyprus

The Republic of Cyprus, on an island in the Eastern Mediterranean, is located south of Turkey and west of Syria and Lebanon. The island, the third-largest in the Mediterranean, has an area of 9,251 km² and a total population of around 1.2 million. It has been independent since 1960, but, following intercommunal violence between Greek and Turkish Cypriots and a Turkish invasion, a separate Turkish state has existed in the north since 1983.

Evidence of human activity by hunter-gatherers, dating back to around 10,000 BCE, has been found in the south of the island. A well-preserved Neolithic village, Khirokitia, in this area, was occupied around 6800 BCE. Around 1400 BCE Mycenaean Greek traders started visiting Cyprus. The island was settled by Greeks in the late Bronze Age, following the collapse of Mycenaean Greece, between 1100 and 1050 BCE. During its history, Cyprus has been occupied by several major powers; in 708 BCE it was invaded by the Assyrian Empire and ruled by them for a century. After a brief period of Egyptian rule, it fell to the Achaemenid (First Persian) Empire in 545 BCE. In 333 BCE Alexander the Great of Macedon conquered the island, but after his death, his empire was divided, and Cyprus became part of the Hellenistic empire of Ptolemaic Egypt. During this period it became wholly Greek, in culture, custom and language. In 58 BCE Cyprus fell to the Roman Republic, and when the Roman Empire was split in 395 CE, it became part of the East Roman, or Byzantine Empire and maintained and strengthened its Hellenistic-Christian culture. Arab raiders from the Levant attacked the island in 649 and continued to do so for about 300 years, causing death and destruction; the city of Salamis, among others, was destroyed and never rebuilt.

In 1191, during the Third Crusade, Richard I (Lionheart) of England captured the island. He sold it a year later to the Knights Templar, a Catholic military order set up to protect crusaders to the Holy Land. They then, after a bloody revolt by the islanders, sold it to Guy of Lusignan, a French Poitevin knight, who had been the king of the “Kingdom of Jerusalem”, a crusader state, until 1192. He established a dynasty that lasted until 1473 when the Republic of Venice assumed control. Venice formally annexed Cyprus in 1489 and the Walls of Nicosia date from this period. The Ottoman Empire that had been growing in power and had conquered Constantinople (now İstanbul) in 1453, frequently raided Cyprus and in 11538 they captured Limassol. Following this, the Venetians also fortified the cities of Famagusta and Kyrenia. In 1570 Ottoman forces invaded en masse and, despite strong resistance, brought Cyprus under its control, with massacres of many Greek and Armenian Christian inhabitants. Turkish soldiers settled on the island, while Turkish peasants and artisans were brought in from Anatolia. Ottoman rule lasted for over three centuries, sometimes harsh, sometimes indifferent, with the Greek Cypriot population represented by the head of the Orthodox Church of Cyprus. When in 1821 the War of Independence broke out in Greece, several Greek Cypriots went there to join; this led the Ottoman authorities to execute hundreds of Greek Cypriots, including the Archbishop and four other bishops, who were beheaded. In 1828 Greece’s first president called for “Enosis”, the union of Cyprus with Greece and this became a popular idea, especially since Ottoman misrule had left the people impoverished, oppressed and exploited.

In 1878, in the aftermath of the Russo-Turkish war, the British Empire took over the administration of the island as a protectorate, in exchange for military support to the Ottoman Empire if Russia would attempt to seize territories of the Ottomans in Asia. The Greeks at first welcomed the British administration, believing that, like the Ionian islands, they would help unite Cyprus with Greece. But this didn’t happen; the British imposed heavy taxes to cover the compensation which they were paying to the Sultan for having conceded the island to them. Cyprus stayed de jure Ottoman territory until 1914 when it was formally annexed and occupied militarily. The following year, during the First World War, offered to cede Cyprus to Greece, but on condition that Greece would join the war on their side. The Greek king declined the offer and in 1925 Britain declared Cyprus a Crown Colony. Two years earlier the Turkish Republic had stated it no longer claimed the island.

The population of Cyprus was around 74% Greek, three times that of the Turkish Cypriots. There was also a small minority of Lebanese Maronite Christians, Armenians and Latins. The Greek Cypriot population had hoped that the British administration would lead to “Enosis”, union with Greece; it had made the offer to Greece in 1915 after all. However, the Turkish Cypriots were against this; they had seen what had happened in Crete, that had joined Greece with its Turkish inhabitants expelled. In 1955 a Greek Army officer and war veteran, Georgios Grivas, founded a Greek Cypriot nationalist guerrilla organisation called ΕΟΚΑ (Ethniki Organosis Kyprion Agoniston - National Organisation of Cypriot Fighters). It aimed to end British rule and eventually union with Greece: the island had historically been Greek in culture and language, and Greek Cypriots considered it their right. The Turkish Cypriots now also viewed themselves as a distinct ethnic group and believed they too should have the right of self-determination. Because they were a minority, annexation to Turkey was not feasible, so they favoured “Taksim”, partitioning the island into a Greek and Turkish sector. Paramilitary armed groups appeared in 1955 also and were absorbed by a Turkish resistance organisation, TMT (Türk Mukavemet Teşkilatı - Turkish Resistance Organisation). The EOKA militants, fighting the British, had at first avoided conflict against the Turkish Cypriots but in 1957 attacks started, leading to Intercommunal violence, forcing the British to try to restore order. Violence escalated during 1958 with many fatalities. Archbishop Makarios III, the political leader of EOKA, declared at the end of 1958 he was ready for a compromise solution, as Greek Cypriots, frustrated by the fighting and violence, were turning against the organisation. Although it was not what they had wanted, both Makarios and Grivas accepted the solution that Cyprus would become an independent Republic.

On 16 August 1960, the Republic of Cyprus came into being, with Archbishop Makarios III its President and Turkish Cypriot Fazıl Küçük as Vice President. Britain retained two Sovereign Base Areas, Akrotiri in the south and Dhekelia between Larnaca and Famagusta. However, tensions between the two communities increased: the Greek Cypriot leadership believed the Turkish population had been given too many rights, and President Makarios proposed constitutional changes. These were opposed by Turkish Cypriots and also rejected by Turkey. On 21 December 1963 intercommunal violence erupted, resulting in the death of 364 Turkish and 174 Greek Cypriots. Over a hundred Turkish Cypriot villages were destroyed, and more than 25,000 Turkish Cypriots were displaced. It brought the end of Turkish Cypriot representation in the Republic, and its people had to live in enclaves. Makarios divided the capital of Nicosia by a so-called Green Line, with United Nations Peacekeeping troops keeping the two communities apart.

A far-right military junta had ruled Greece since 1967. On 15 July 1974 a coup d’etat was carried out in Cyprus by their leader, Dimitrios Ioannides, ousting President Makarios and replacing him with Nikos Sampson. He had been a member of EOKA and now aimed to unite the island to Greece, the “Enosis”. Five days later, on 20 July 1974, the Turkish army invaded the island, bombing Greek positions and dropping hundreds of paratroopers. They swiftly occupied the area between Nicosia and Kyrenia and eventually landed 30,000 troops and military vehicles. Their justification was to restore the Treaty of Guarantee of 1960. However, the United Nations and the international community rejected this. A ceasefire was agreed, and the regime of Nikos Sampson collapsed, following the fall of the junta in Athens. Makarios returned to Cyprus in December 1974, and constitutional order was restored - but the Turkish troops remained, occupying 36% of the island in the north, evicting 180,000 Greek Cypriots from their homes. Also, 50,000 Turkish Cypriots were displaced, settling in the homes of displaced Greeks in the north. An Autonomous Turkish Cypriot Administration had been formed in the north after the invasion. The “Turkish Federated State of Cyprus” was declared in 1975, as the first step towards a federated Cypriot state. But the Republic of Cyprus and the United Nations rejected this. On 15 November 1983 the north unilaterally declared its independence, as the “Turkish Republic of Northern Cyprus”, with Rauf Denktaş as its President. This declaration of independence was also rejected by the Republic of Cyprus and the international community: only Turkey recognised it.

Turkey has sent around 150,000 settlers from Anatolia to the north of Cyprus, in violation of the Geneva Convention and various UN resolutions. This has created tensions, with long-time Turkish Cypriots seeing their culture diluted by the settlers. There have been attempts to settle the dispute, but this still has come to naught. The United Nations-controlled Green Line provides a buffer zone that separates the two sides and covers 2.67% of the island. However, border restrictions were eased by the north in April 2003, and it is now possible to cross between the two sides in Nicosia. Cyprus joined the European Union on 1 May 2004, but EU legislation is not valid in Northern Cyprus al long as there is no settlement; the Republic adopted the Euro on 1 January 2008, while the north uses the Turkish Lira. Cyprus is a major tourist destination in the Mediterranean and, despite the ongoing division, both sides can be freely visited. It is a fascinating country with a rich history and culture, but the scars of the tragic recent past need a lot of healing. There is still hope of reunification. On 15 May 2015, President Nicos Anastasiades of the Republic of Cyprus started talks with President Mustafa Akıncı of North Cyprus, a long-standing advocate of the island’s reunification. He has opposed Turkey’s increasing influence in Northern Cyprus. However, the negotiations, in which the United Kingdom, Greece, and Turkey were eventually to participate, ended without a deal on 7 July 2015 and a solution still isn’t in sight.