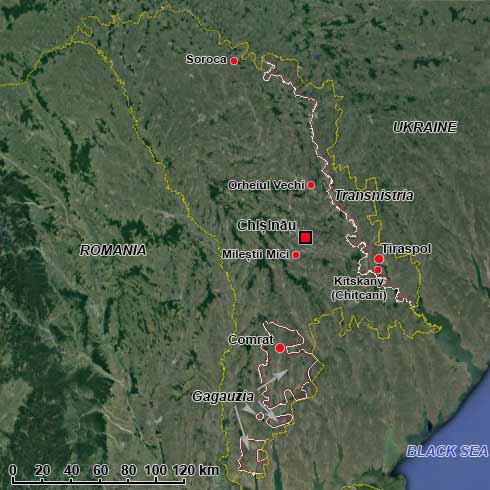 A short history of Moldova

Moldova is a small, independent republic in Eastern Europe, a former constituent republic of the Soviet Union and formerly also a part of Romania. It has a border with Romania to the west and Ukraine to the north, south and east - although that is via the disputed territory of Transnistria. It has an area of 33,846 km² and a population of almost 3 million, excluding Transnistria (with around 475,000 people). Early humans were here during the early Paleolithic era and Dacian tribes lived here when the region came under Roman rule in the 1st century CE. It subsequently came under Byzantine rule but was invaded many times until the early Middle Ages by Goths, Huns, Avars, Bulgarians, Magyars, Pechenegs, Cumans, Mongols and Tatars. In 1359 the Principality of Moldavia was founded in what is now Romania, Moldova and Ukraine, stretching from the Carpathian mountains to the Dniester rivers and from Bukovina in the north to the Black Sea. It was invaded by Crimean Tatars and by Ottoman Turks during the 15th century; Stephen III of Moldavia, known as Stephen the Great (Ștefan cel Mare) ruled from 1457 to 1504 and campaigned against them, but ultimately by 1512 the region was part of the Ottoman Empire. In 1538 it paid tribute to the Ottomans, but kept some internal autonomy.

The area between the Prut and Dniester river that became known by the name of Bessarabia (Basarabia in Romanian, now mostly part of Moldova) was during the 18th and 19th century the object of occupation by Russian forces; in 1812, Bessarabia was acquired by Russia, but southern Bessarabia was restored to Moldavia in 1856 under the Treaty of Paris, after the Crimean War. A plebiscite in 1857 showed that people wanted a union of Wallachia and Moldavia and in early 1859 both countries elected Colonel Alexandru Ioan Cuza as prince and the country became the United Principalities of Romania that year. In 1878, as a result of the Treaty of Berlin, Romania was forced to cede the southern part of Bessarabia back to the Russian Empire, that encouraged colonisations in the areas vacated by Turks after the Ottoman Empire lost these areas.

During World War I as many as 300,000 Bessarabians had been drafted into the Russian Army and after the Russian revolution of 1917 a Bessarabian parliament, Sfatul Țării (National Council), was elected, proclaiming in December of that year the Moldavian Democratic Republic within a federal Russian state. On 6 February 1918 it declared the independence of Bessarabia. Two months later, on 9 April 1918, the Sfatul Ţării voted for union with Romania: Bessarabia became part of a greater Romania, that now also included the former Hungarian territory of Transylvania. The Western European powers recognised the union of Bessarabia and Romania by the Treaty of Paris (1920), but this was not recognised by the Bolsheviks in what had become Soviet Russia and, although they had proclaimed a Bessarabian Soviet Socialist Republic on 5 May 1919 in Odessa, this did not come into existence.

Moldavian Autonomous Oblast (Province or Area) was created on 7 March 1924 within the Ukrainian Soviet Socialist Republic (SSR), in the Ukrainian zone of Balta, Odessa region, east of the Dniester river; it encompassed modern Transnistria (now, de jure, in Moldova, de facto, a breakaway state) and a number of territories, now part of Ukraine. Seven months later, on 12 October 1924, the "Moldavian Autonomous Soviet Socialist Republic" was set up here. It had a population of just over 30% Moldovans, and 48.5% Ukrainians. In December 1924 the Cyrillic script was adopted to write the Moldavian/Romanian language on the Soviet pretence that "Moldavian" is different from "Romanian" and keep "Moldavian Socialist culture" separate from Romanian. However, in 1932 there was a trent in the Soviet Union to move all non-Slavic languages to Latin script and the Cyrillic script was dropped; but in 1938 the Cyrillic script was again declared official for the Moldavian language and the Latin script was banned for the second time.

On 26 June 1940 the Soviet government issued an ultimatum to Romania, demanding it immediately cede Bessarabia and Northern Bukovina. Fascist Italy and Nazi Germany, after the Molotov-Ribbentrop Pact between Hitler and Stalin recognising it to be within the Soviet sphere of influence, pressured Romania to comply and two days later Soviet troops crossed the Dniester. They occupied Bessarabia, Northern Bukovina, and the Hertza region, initially annexing them to the Ukrainian SSR. On 2 August 1940, the Soviet Union established the "Moldavian Soviet Socialist Republic" (Moldavian SSR), consisting of six counties of Bessarabia, joined to the westernmost part of what had been the Moldavian ASSR. In the summer of 1941, Romania joined Hitler's Axis in the invasion of the Soviet Union, recovering Bessarabia and northern Bukovina, as well as occupying the territory to the east of the Dniester it dubbed "Transnistria". During that time about 147,000 Jews were deported by Romanian forces working with the Germans; around 90,000 died. But by the end of World War II the Soviet Union had reconquered all of the lost territories, reestablishing Soviet authority there.

During the war and in the years after many thousands of people were deported to Soviet gulags, were drafted into the Soviet army - more than 40,000 of those died. In 1946 Soviet mismanagement of agriculture produced a famine that left at least 216,000 dead in the Moldavian SSR alone. After the war there were anti-Soviet resistance groups, but the secret police managed to arrest, execute or deport their members. Russian speakers were settled into the Moldavian SSR, especially urban areas, changing the ethnic makeup of the state. The Soviet government continued their campaign to promote a Moldovan ethnic identity distinct from that of the Romanians, asserting that the language spoken by Moldovans was distinct from the Romanian language and written in the Cyrillic alphabet. In actual fact there are only small dialectical differences between the two.

In the 1980s, as a result of reforms in the Soviet Union, a a Democratic Movement of Moldova was formed, which in 1989 became known as the nationalist Popular Front of Moldova (FPM). A Grand National Assembly in the capital Chișinău pressured the authorities of the Moldavian SSR on 31 August 1989 to proclaim the Moldovan language written in the Latin script to be the state language and recognise its identity with the Romanian language as well. On 23 June 1990, the Parliament adopted the Declaration of Sovereignty of the "Soviet Socialist Republic of Moldova", which stipulated the supremacy of Moldovan laws over those of the Soviet Union and Moldovan (Romanian) the official language instead of Russian. On 23 May 1991 the Moldavian parliament changed the name of the country to the "Republic of Moldova" and on 27 August that year Moldova seceded from the Soviet Union and became a sovereign, independent state; Romania was the first country to recognise its independence; there were voices on both sides of the border that called for the two countries to reunite once more.

The Gagauzians, a Christian people speaking a Turkic language, settled in Bessarabia after they fled Ottoman rule in what is now Bulgaria. When, in August 1990, Moldova declared Moldovan (Romanian) the official language instead of Russian, the Gagauz worried about their future if Moldova would reunite with Romania, and proclaimed their autonomy in Comrat, the main town in the largest of the four small territories; but moves to establish a separate administration were suppressed by Moldova. In a referendum the Gagauz declared they wanted to remain part of the USSR and, when the Soviet Union started to disintegrate, Gagauzia declared itself independent on 19 August 1991. When Moldova itself declared independence eight days later, six of the 12 Gagauz deputies in the Moldovan parliament voted in favour, while the other six abstained. On 23 December 1994 Moldova's Parliament awarded Gagauzia the status of "national-territorial autonomous unit"; it encompasses 23 communes and three towns with a large ethnic Gagauz population in the four small territories, called Gagauz Yeri, in the south of the country, with three official languages: Romanian, Gagauz, and Russian.

After the breakup of the USSR, the narrow strip of land of Moldova to the east of the Dniester river, broke away and declared its independence on 2 September 1990, also because there was the fear Moldova would unite with Romania; and although Moldovans are the largest ethnic group (32%), Russians are not far behind with over 30% and Ukrainians with almost 29%; many of those also have citizenship of those countries. A war broke out between Transnistrian separatists and the Moldovan army, Russian volunteers came in and a full war erupted in 1992 in which the Russian army entered on behalf of the separatists; a ceasefire agreement was signed on 21 July 1992 and has held; it is now a "frozen conflict" and Transnistria, or the "Pridnestrovian Moldavian Republic", is only recognised by similar unrecognised breakaway states: Abkhazia, Nagorno-Karabakh and South Ossetia.

In 1994 plans for a union with Romania were abandoned, and a new Constitution had been giving autonomy to breakaway Gagauzia and Transnistria (although that made no difference in the latter). In 1996 Petru Lucinschi, the former First Secretary of the Moldavian Communist Party during the last years of Soviet rule, became Moldova's second president, succeeding first president Mircea Snegur. The re-insituted Party of Communists of the Republic of Moldova won almost 50% of the votes: the country became a parliamentary republic, with the president being chosen through indirect election. It was the first post-Soviet state where a non-reformed Communist Party returned to power - they managed to stay in power for eight years.

In the April 2009 parliamentary elections the Communists again won almost 50% of the votes, but this sparked civil unrest: the Revolta de la Chișinău (the Chișinău revolt), began on 7 April 2009 in which rioters attacked the parliament building and presidential office, breaking windows, setting furniture on fire and stealing property. Four months later four Moldovan parties formed a coalition pushing the communists into opposition. Then, in 2014, it was discovered there had been large-scale theft at three banks by means of fraudulent loans to business entities controlled by a Moldovan/Israeli oligarch, Ilan Shor, of funds worth about 1 billion U.S. dollars. This caused political instability and massive public protests, with protesters camping in front of the Parliament building displaying slogans denouncing the massive corruption. Although a new government led by Pavel Filip was invested in January 2016, it was alleged that corruption in Moldova remained endemic, with a Moldovan oligarch, Vladimir Plahotniuc, still having influence over the government.

>
Back to Menu at Top of the Page