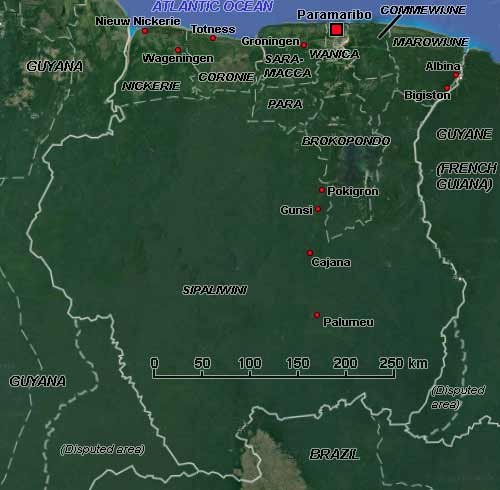 A short history of Suriname

The Republic of Suriname is, with just under 165,000 km², the smallest independent country of South America, on the northeastern Atlantic, bordered in the west with Guyana, to the east with (even smaller) French Guiana (Guyane) and Brazil to the south. It has a population of approximately 566,000, most of whom live on the country's north coast, in and around the capital and largest city, Paramaribo. It was inhabited for about 5,000 years by various Amerindian peoples long before European contact - the name "Suriname" may derive from a Taino (Arawak-speaking) indigenous people called Surinen, who inhabited the area at the time when, in the 17th century, British settlers first established a European colony along what is now called the Suriname river - they called the country "Surinam". Arawak and later also Carib tribes lived along the coast and savanna, while smaller indigenous groups lived further inland in the vast rainforests.

The Dutch and English established plantations in the plains of the area called Guiana, and in the 17th century disputes arose between them regarding control. A war between the English and the Dutch, between 1665 and 1667, was brought to an end with the Treaty of Breda, in which the Dutch kept Suriname in exchange of New Amsterdam on the coast of North America: now the city of New York. The Dutch also had established colonies during the 17th and 18th century to the west of the Corantijn river, but these were ceded to the British in 1814, forming British Guiana - now Guyana. The planters of the colony relied heavily on African slaves to cultivate, harvest and process coffee, cocoa, sugar cane and cotton plantations along the rivers. Treatment of the slaves was often terrible and many slaves escaped the plantations into the deep jungles where, with the help of the Amerindians, they established a unique culture, building on their African roots. Called "Bosnegers" (bush negroes) by the Dutch or Marrons (Maroons), they gradually diverged as independent tribes, with their own identities, shaped by the fact they descended from different African ethnicities.

The Maroons raided plantations, often managed to recruit new members from the slaves who were there, capture women and weapons, food and supplies. Sometimes planters and their families were killed in the raids. Armed campaigns against them were rarely successful, as the Maroons knew the forest must better than the white colonists; so, to end hostilities, the colonial authorities signed several peace treaties with different tribes in the 18th century, granting the Maroons sovereign status and trade rights in their inland territories. Slavery was abolished in Suriname in 1863, on the condition the slaves kept working for a small salary for another 10 years. Most of them left the plantations after that and, to make up for the resulting shortage of labour, indentured labourers from the island of Java in the Dutch East Indies (now Indonesia) were recruited and transported, as well as labourers from (British) India; smaller numbers of workers from China and the Middle East had been brought in as well. As a result of this, Suriname is now one of the most ethnically and culturally diverse countries in the world.

After the Second World War (in which the United States occupied Suriname to protect its bauxite mines to support the Allies war effort) the Netherlands reviewed the relations with its colonies, also in view of Indonesia's independence. In 1954, Suriname became one of the constituent countries of the Kingdom of the Netherlands, along with the Netherlands Antilles and the Netherlands, in which it received autonomy, with defence and foreign affairs remaining under Dutch control. In 1974, the local government, led by the NPS (National Party of Suriname), dominated by Creole, (ethnically African or mixed African-European) started negotiations with the Dutch government leading towards full independence, which was granted on 25 November 1975.

In the years leading up to that date, nearly one-third of Suriname's population of Suriname emigrated to the Netherlands, as many people worried they would be worse of under independence. Johan Ferrier, the former governor, became the first President of the country and Henck Arron (leader of the NPS) the Prime Minister. Soon ethnic polarization and corruption became endemic, Dutch aid money misused by the NPS, its leaders accused of fraud in the 1977 elections, Henck Arron won a further term, and a large number of the population also fled to the Netherlands, joining the already significant Surinamese community there. And then, on 25 February 1980, a military coup overthrew Arron's government: initiated by a group of sixteen sergeants, it was led by Dési Bouterse and marked the beginning of the military dictatorship that dominated Suriname from 1980 to 1991.

Opponents of the military regime attempted counter-coups on four occasions during 1980, 1981 and 1982 and 1982. And then, 7 December 1982, the military, under the leadership of Dési Bouterse, rounded up 13 prominent citizens who had criticized the military dictatorship and had all these men executed over the next three days at Fort Zeelandia in Paramaribo: the notorious "December murders". In 1986 a brutal civil war broke out between Maroons loyal to rebel leader Ronnie Brunswijk and the army, who massacred at least 35 people in the eastern village of Moiwana, causing many people to flee across the Marowijne river into French Guiana. In 1987 after National elections and adoption of a new constitution, Dési Bouterse remained in charge of the army and a powerful figure; so much so, he dismissed the government ministers - by telephone - in 1990, although after fresh elections a year later his power started to wane.

In 1999 Bouterse was tried in absentia in the Netherlands on drug smuggling charges, convicted and sentenced, but he remained in Suriname and made a political come-back 11 years later: on 19 July 2010 he was elected as President of Suriname although charged earlier that year, along with 24 others, with the December murders of 15 dissidents. In 2012, two months before the verdict in the trial, the National Assembly had extended its amnesty law and provided Bouterse and the others with amnesty of these charges. Bouterse enjoys tremendous popularity in Suriname and, in the elections of 2015, his National Democratic Party (NDP) gained an overwhelming majority of the votes and he was reelected as President again.

For the visitor Suriname is a wonderful country to visit and has a lot to offer: the inner city of its capital Paramaribo with its wooden Dutch colonial buildings is on UNESCO's World Heritage list, it has a very diverse and friendly population, a blend of different cultures, old plantations and pristine rainforest, exotic plants and animals, wild rapids, large rivers and stunning mountainous areas in the southern part of the country, with opportunities to visit its Amerindian and Maroon villages. Reflecting its Dutch colonial heritage, the official language is still Dutch, although Sranan or Sranantongo, a mainly English-based creole language, is the lingua franca between the different communities, who all have retained their own languages.