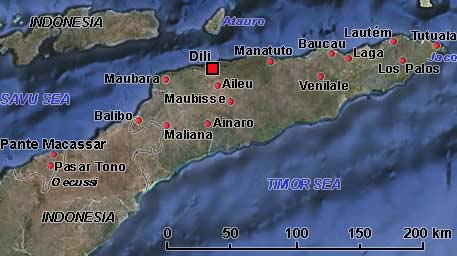 A short history of Timor-Leste

The island of Timor is the largest (33,850 km²) and easternmost of the Lesser Sunda Islands (Nusa Tenggara) of Indonesia. The Timorese people, who form a majority on the island, are a people of mixed Asian and Melanesian traits and are mainly Roman Catholic. Portugal began trading with Timor in 1520 which became a colony in 1702 when the first governor from Lisbon arrived. The Dutch settled in the west and treaties, signed in 1859 and 1916 (when the present borders were established) between the Portuguese and the Dutch divided the island in half. Dutch-controlled West Timor became part of the newly independent Indonesia in 1950, while the east remained a Portuguese colony.

After the 1974 “Carnation Revolution” that saw the end of its colonies, Portugal abandoned East Timor, which unilaterally declared itself independent on 28 November 1975. Indonesia, claiming the popular East Timorese FRETILIN party was communist, invaded on 7 December 1975 to prevent it from gaining control of former Portuguese Timor. With the American war in South Vietnam lost and fearing communist influence in the region, the US and its ally Australia did not object, in spite of the fact the invasion caused enormous economic hardship and loss of life. Indonesia formally made East Timor its 27th province on July 1976, a move that was however never recognised by the United Nations. Although Indonesia began to provide development aid and economic conditions improved somewhat in the 1980s, a massacre of unarmed pro-independence demonstrators by Indonesian soldiers in 1991 provoked renewed international criticism.

General Soeharto resigned as Indonesian President after extensive demonstrations in 1998. He was succeeded by B.J. Habibie, who announced in 1999 that a free referendum could take place under United Nations supervision, on whether East Timor should stay as an autonomous region in Indonesia or become an independent nation. The referendum was held on 30 August 1999, with 78.5% of the population opting for independence. Pro-Indonesian militias, led by Enrico Guiterres, armed and supported by the army, went on a violent rampage, killing and driving people from their homes, destroying and looting the capital, Dili, and burning villages. An Australian led multinational peacekeeping force, INTERFET, was sent to restore order and implement the results of the ballot. The country became independent on 20 May 2002 as the Democratic Republic of Timor-Leste with popular resistance hero Xanana Gusmão as its first President.

After 400 years of Portuguese neglect, 24 years of brutal Indonesian military occupation and the destruction by its militias when the Timorese voted for independence, Timor-Leste is one of the poorest countries on earth. There are communal differences between the people of the east and the west, giving rise to riots and burning of houses in Dili in 2006. There are still East Timorese refugees in West Timor, and most perpetrators of the 1999 violence are in Indonesia and may never be brought to trial. Still, the country is beautiful, with its mountains and coastline, crumbling Portuguese forts and churches and the people are friendly and welcoming to visitors. The official languages are Portuguese and Tetum, but also Indonesian is still widely understood.