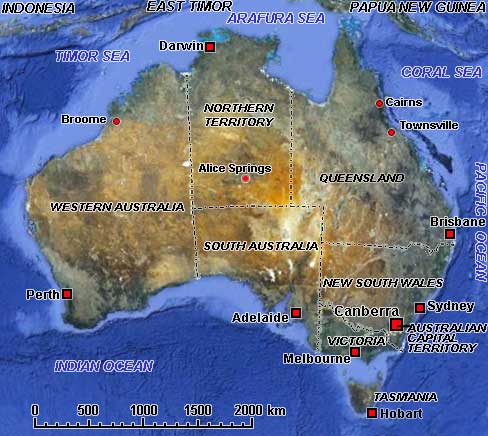 A short history of Australia

Australia is the world's smallest continent and sixth-largest country with an area of 7,686,850 km². It has relatively speaking more desert land than any other continent and, with about 22.5 million inhabitants, a low population density. Australia's isolation accounts for its unique varieties of vegetation and animal life and its distinct Aboriginal culture. Although a highly developed country, vast areas of the interior, known as the Outback, remain all but uninhabited. The Outback has changed little in centuries and could therefore be called the Real Australia. In Outback Australia both Aboriginal culture and the western pioneer culture live side by side in a vast and varied land of great contrast, harsh and beautiful, arid one part of the year, flooded the other, sometimes blazing hot, while frost may occur in the Centre as well. It is a land of deserts and waterfalls, balmy tropical nights and cyclones. There are droughts and floods, sometimes within the space of one year. It's unique.

For at least 40,000 years before Europeans settled here, Australia was inhabited by indigenous Australians, who belonged to one or more of the roughly 250 language groups. These Aboriginal groups probably migrated from south east Asia, using land bridges and short sea-crossings; they could have come via what is now Papua New Guinea, that was once attached to northern Australia. They could have crossed by land into Tasmania, before rising sea levels made it into an island. Most Indigenous Australians were hunter-gatherers, with a complex oral culture and spiritual values based on reverence for the land. The Torres Strait Islanders, ethnically Melanesian and related to people from mainland Papua New Guinea, were horticulturalists and hunter-gatherers and quite distinct from the Aboriginal groups living on the mainland.

The first recorded European sighting of the Australian mainland and the first recorded European landfall on the Australian continent were attributed to the Dutch navigator Willem Janszoon, who apparently landed near what is today the town of Weipa, western Cape York, on 26 February 1606. The Dutch charted the western and northern coastlines of what became known as "New Holland" during the 17th century, but were not interested to settle, as they were more preoccupied with trade in the East Indies; and the Australian indigenous peoples had nothing to trade! The English buccaneer William Dampier landed on the northwest coast of Australia in 1688 and 1699, but apparently was not impressed with what he found, describing a land of "Sun, sand, sin and sore eyes". In 1770, James Cook sailed along and mapped the east coast of Australia, naming it "New South Wales" and claiming it for Great Britain - something that seemed normal in those days, without need to consult the people living there. Cook's discoveries prepared the way for establishment of a new penal colony: as the American colonies had become independent, prisoners could no longer be sent there.

On 26 January 1788 the First Fleet under command of Captain Arthur Phillip landed at Sydney Cove, Port Jackson; this date eventually became Australia Day, the National day. The British Crown Colony of New South Wales was proclaimed. Van Diemen's Land, now known as Tasmania, was settled in 1803 and became a separate colony in 1825. The western part of Australia was formally claimed in 1828, South Australia became a colony in 1836, Victoria in 1851, and Queensland in 1859. The Northern Territory was founded in 1911 when it was excised from South Australia. On 1 January 1901, federation of the colonies was achieved and the Commonwealth of Australia was established. The Federal Capital Territory (later renamed the Australian Capital Territory) was formed in 1911 as the location for the federal capital of Canberra, situated about halfway between the cities of Sydney and Melbourne.

In many parts of Australia the Palaeolithic culture of the Aborigines did not survive European settlement of the early 1800s. Living from fishing, hunting, and gathering, the Aborigines developed kinship systems and rich and complex mythologies. It is estimated there were about 500 tribes and as many languages among the 350,000 Aborigines living in Australia when the Europeans arrived. The indigenous population declined steeply for 150 years following settlement, mainly due to infectious disease; dispossession of their land and culture and the removal of Aboriginal children from their families (the "Stolen Generations") also contributed to the decline in the Indigenous population. Today their numbers have increased again and Aboriginal and Torres Strait Islander society is in transition, yet traditional culture lives on, adapting to the modern world.