THE SOUTH EAST OF AUSTRALIA 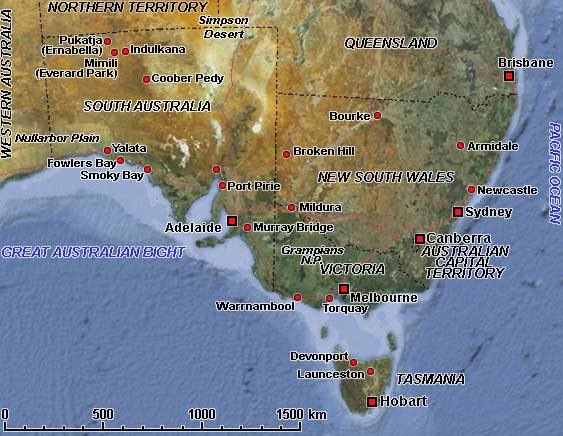 The south eastern corner of Australia is the region that is least associated with the "Outback"; it has the coolest climate and became the most popular settlement of the colonists, causing a great decline in the Aboriginal population. The four smallest states of the country hold more than three quarters of Australia's population.

New South Wales, the "Premier State", is where European colonisation of Australia first began and where in 1788 Sydney, the country's largest city, would develop. The countryside and beaches are spectacular and, in the west, there is the real outback, with vast plains, farms and Aboriginal communities.

Victoria, in the south east, is the smallest mainland state, first settled by whites in the mid-19th century after the discovery of gold, which brought disaster for its Aboriginal population. It is a mountainous state and the Murray River, Australia's longest permanently flowing river, forms the greater part of the border with New South Wales and Melbourne, the capital, is the country's second largest city.

South Australia lies to the south of the vast Northern Territory and, in the north, is a continuation of the arid plains and hills of the NT, with an Aboriginal population that shares language and culture with the desert people of Central Australia. Further south, the landscape gradually becomes more lush, with wine-growing areas and the state capital of Adelaide, spacious and surrounded by parklands.

Tasmania is the nation's smallest state, separated from the rest of Australia by Bass Strait. It became a convict colony in 1803 and this spelled doom for the unique Tasmanian Aborigines who were hunted down and killed when the white settlers took over the land. The last full-blooded Tasmanian died in 1876, although mixed-blood descendants still claim their heritage. The island is well suited for agriculture and large farms. The remains of old growth rain forest now have an active environmental movement striving to protect its unique environment.