Photos from the Northern Territory, Australia 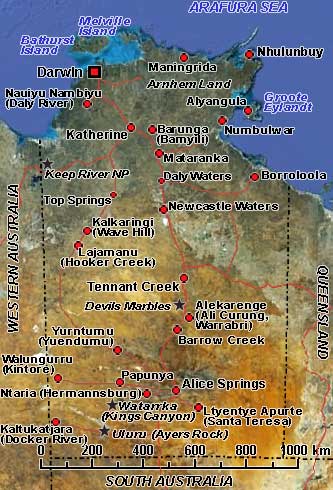 A short history of Northern Territory

The Northern Territory, a federal territory of Australia, occupies much of the centre of the mainland continent, as well as the "Top End": central northern regions. It is vast: an area of almost 1,350,000 km², but with only around 227,000 people, making it the least populous of Australia's eight major states and territories. The population density is one of the lowest in the world and about a third of the inhabitants now are Aborigines living on reservations that cover 20% of the territory. This is really, as the slogan on the Territory's number plates proclaims, "Outback Australia".

This ancient land has been occupied for over 40,000 years by Indigenous Australians belonging to many different cultural and linguistic groups. Makassan traders from Sulawesi (now part of Indonesia) began trading with the indigenous people of the Northern Territory for trepang, ("sea cucumber"), a marine invertebrate prized in China as food, medicine and even as an aphrodisiac from at least the 18th century onwards, and probably for 300 years earlier than that. The first recorded sighting of the Northern Territory coastline was in 1606 by Dutch navigator Willem Janszoon aboard the ship Duyfken. On 30 September 1824 Fort Dundas was established on Melville Island as a part of the Colony of New South Wales, the first settlement in Northern Australia. It was abandoned however only four years later because of the resistance of the local Tiwi people, cyclones and disease. A second settlement, Fort Wellington, was established on the Cobourg Peninsula at Raffles Bay on 18 June 1827. but was also abandoned two years later. The third attempt was Fort Victoria at Port Essington, also on Cobourg Peninsula, on 27 October 1838; this lasted until 1 December 1849, when this, too, was abandoned.

Following the annexation of the Territory by South Australia in 1863 another attempt at settlement was made a year later, at Escape Cliffs, about 75 kilometres from present day Darwin. But the local Marananggu Aborigines objected to the settlement and after many confrontations it was disbanded in 1867. Other sites were considered until a small settlement was established at Port Darwin on 5 February 1869. It was named Palmerston after the British Prime Minister at the time; it was renamed in 1911 in honour of the British naturalist Charles Darwin. It was heavily bombed in the Second World War and almost demolished by Cyclone Tracy on Christmas Eve 1974.

Cattle raising and the mining of metallic ores such as uranium, iron, manganese, copper, lead, and zinc have been the mainstays of the Territory's economy for many years, but tourism is now more important especially with Kakadu National Park in the Top End and the Uluru-Kata Tjuta National Park (Ayers Rock) in central Australia. The landscape, from the relatively level coast bordering the Arafura and Timor seas, gradually rises to a plateau with an average height of 457 metres. The highest point in the territory is Mount Zeil, at 1510 metres. Most of the area is arid, with less than 255 mm of rainfall annually, except for the Top End, the northern monsoonal fringe, where rainfall averages 1525 mm each year. A land of contrast, with the lush Top End in the north and the usually dry Centre; a land of Aboriginal communities, cattle stations and small towns; a land where nature runs riot and people are laid back and friendly.