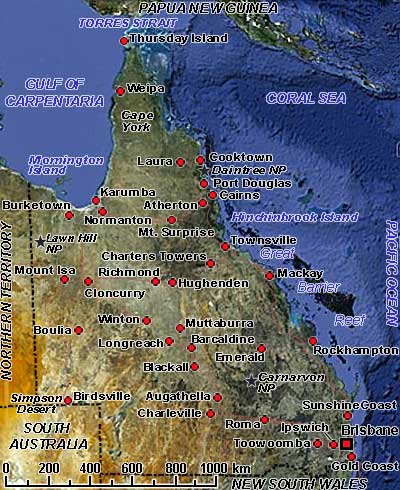 A short history of Queensland

Queensland, the "Sunshine State", covers 1,727,00 km², almost one-quarter of the continent. It is the country's third most populous state, with a population of about 3,200,000. The capital city is Brisbane. Queensland has the largest Aboriginal population in Australia, most living in rural areas, in communities and on cattle stations. The Torres Strait Islands off the tip of Cape York have a Melanesian population with a distinct culture and there are also Pacific Islanders who were brought here to work in the 19th and early 20th centuries.

Indigenous Australians and Torres Strait Islanders probably arrived here between 40,000 and 65,000 years ago. They lived undisturbed until in early 1606 the Dutch ship "Duyfken", captained by Willem Janszoon, encountered and chartered the shores of Queensland's Cape York Peninsula in the Gulf of Carpentaria, making landfall at the Pennefather River and meeting the local Aborigines there; Janszoon is therefore credited with the first authenticated European discovery of Australia. In 1770 Captain James Cook and his crew sailed past the eastern shore of the continent; Cook named the Glasshouse Mountains and various islands along the coast. His ship "Endeavour" beached on a reef and was repaired on the site where the town of Cooktown was later established. Only 89 years later, on 6 June 1859, Queensland was named after Queen Victoria and made a British Crown Colony, separating it from New South Wales; the date is celebrated state-wide as Queensland Day. Moreton Bay had been established as a penal colony and a second time place for convicts, who had been serving out their sentences in New South Wales; this became the core of Brisbane, the State Capital. Later free settlement was encouraged and this vast area became the home of farmers, miners and cattlemen, displacing, often violently, the indigenous people.

The Great Dividing Range divides the fertile eastern third of the state from the arid western portion. A vast plain with occasional subdued ranges characterises the western two-thirds. Generally, summer temperatures are high, averaging 31 °C in January; winters are mild, with a July average of 11 °C. Along the Pacific coast stretches the Great Barrier Reef, the largest reef in the world. There are fantastic beaches and islands with world class resorts. The coastal plain rises to the tablelands, with waterfalls and forests. And inland, after crossing the Great Dividing Range, is the vast Outback, a world away.