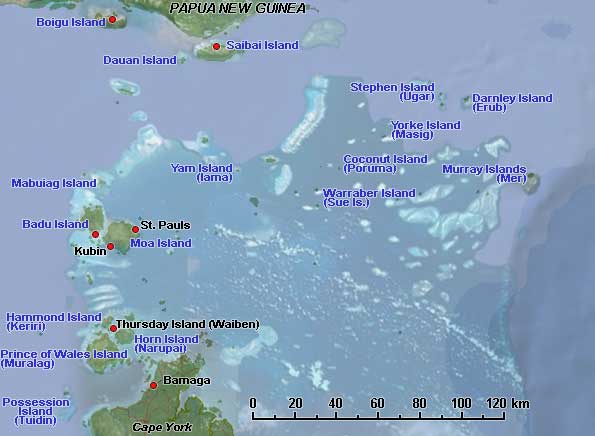 A short profile of the Torres Strait Islands

The Torres Strait Islands are a unique part of Australia and unlike any other part of this vast country. It is an archipelago of small islands between Cape York, the northern point of the Queensland land mass and the south coast of Papua New Guinea, stretching about 120 kilometres from north to south and around 150 kilometres north eastwards to the northern outliers of the Great Barrier Reef.

The islands, ranging in size from Prince of Wales Island (Muralag), with a diameter of roughly 23 kilometres to tiny coral sand islets less than a hectare in area. The larger islands have permanent inhabitants, the mainly Melanesian Torres Strait Islanders, a people related to the inhabitants of nearby Papua New Guinea, with whom they share many cultural traits. An exception is the Kaurareg people of Muralag (Prince of Wales) Island, Hammond and Horn Island who share certain cultural traits and identify with the Aboriginal groups of nearby Cape York.

Traditional languages are still spoken: Muralag, an Aboriginal language, in the south west as far as Mabuiag; Kalaw Kawaw Ya in the north western islands of Boigu, Dauan and Saibai; Kala Lagaw Ya in the central islands; and Meriam Mir in the north eastern islands of Ugar (Stephen I.), Erub (Darnley I.) and Mer (Murray I.). But an English based island Creole (sometimes called "Broken") is the Lingua Franca in all the islands and, of course, English is taught in schools and understood by all. Many Torres Strait Islanders now live outside their island home, in towns in northern Queensland. After primary school, children may go to the High School on Thursday Island or one of the boarding schools on the mainland.

There are moves towards greater autonomy for the islands and control of their natural resources, especially the sea, which not only provides the islanders with food; there is a fish processing plant on Yorke Island (Masig). Murray Island (Mer) is the home of the late Eddie Mabo, who was a pioneer of the Land Rights movement: in 1982 he led a group of five Torres Strait Islanders who successfully argued against the notion of "Terra Nullius", the myth that Australia was in fact "empty land", unoccupied ready to be colonised; the Murray Islanders had been there for thousands of years and thus could "prove" their ownership to the land. The High Court of Australia rejected the "Terra Nullius" myth in 1992, recognising the principle of Native Title before the arrival of the British, 200 years ago. The islanders now run their islands through their own councils and permits are required to visit. No permit is needed, however, to visit the main town of Thursday Island ("T.I." to its inhabitants) and Islander life may be sampled there.