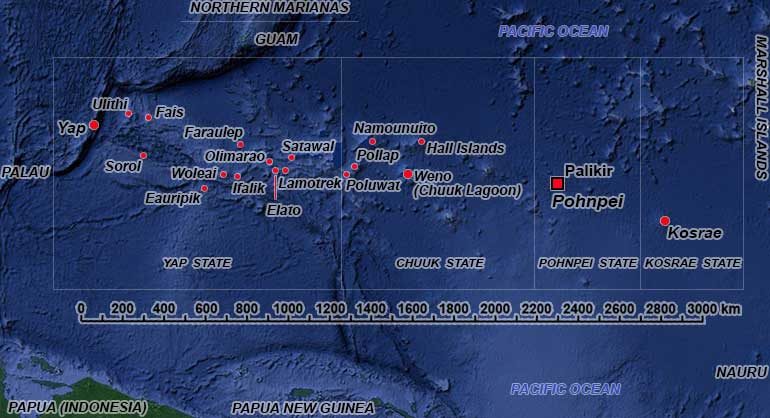 A short history of the Federated States of Micronesia

Archaeological evidence seems to suggest that the islands were peopled from the west, from the Philippines or even Indonesia. In contrast, linguists suggest migrations from the east, from Kiribati and the Marshall Islands, around 1000 BCE. Eventually, systems evolved with chieftains and its own traditional culture on the different islands. On the island of Pohnpei, the impressive ceremonial site of Nan Madol was constructed during the period of the Saudeleur dynasty, between ca. 1100 and 1600 CE. On the island of Kosrae, a city on the islet of Leluh, built from coral blocks and basalt, existed since ca. 1250 CE; its civilisation peaked around the 14th and 15th centuries CE.

Portuguese and Spanish explorers arrived in the 16th century, and in 1565 Spain claimed sovereignty over the Mariana Islands, Guam and the “Caroline Islands”. Initially named “New Philippines”, they were renamed after Spanish King Carlos II in the 17th century. The Spanish controlled the “Spanish East Indies” from Manila, in the Philippines. The Spanish-American war of 1898 resulted in the United States occupying the Philippines (that included Palau), Guam and the Marianas. The smaller islands, including the present FSM, were sold to Germany for 25 million pesetas or 17 million Marks, as agreed in a German–Spanish Treaty of 1899. The Germans turned Yap into a significant naval communications centre and cable telegraph station.

At the outbreak of the First World War, it was invaded by Japanese troops in September 1914, and the Imperial Japanese Navy occupied the islands. In 1919 the League of Nations granted Japan the “Mandate for the German Possessions in the Pacific Ocean lying North of the Equator” (the South Seas Mandate). These were all of the Caroline, Mariana and Marshall islands and the Japanese Nan’yō Government made it known no foreign ships were allowed to enter Micronesian waters. They established towns, like Kolonia on Ponape (Pohnpei), including geisha houses and turned Truk (Chuuk) into a major navy base. Large-scale Japanese settlement took place in the islands; During this time, the Japanese population grew to over 100,000 throughout Micronesia, while the indigenous people became, with 40,000, heavily outnumbered.

During the Second World War, the United States bypassed many of the islands, blockading and bombing them. They sank most of the Japanese fleet in Truk (Chuuk) Lagoon; on Woleai atoll, that was heavily reinforced by the Japanese, most succumbed to starvation and disease: of the Japanese garrison of 6,500, only 1,650 survivors were eventually evacuated by the Americans in 1945. After the war, all Japanese were expelled by the Americans, and in 1947 the United Nations created the Trust Territory of the Pacific Islands, encompassing the former Japanese possessions. The United States became the Trustee and promised: “to promote the economic advancement and self-sufficiency of the inhabitants”.

On 10 May 1979, four of the Trust Territory districts - the present states of the FSM - ratified the Constitution of the Federated States of Micronesia. The neighbouring trust districts of Palau, the Marshall Islands, and the Northern Mariana Islands had decided not to participate in this and gone their own way. The former President of the Congress of Micronesia, Tosiwo Nakayama, became the first President of the FSM and on 3 November 1986, the country became independent. The Compact of Free Association with the United States came into force that same day; under this agreement, the U.S. has full authority and responsibility for the defence of the FSM and provides for U.S. grant funds and federal program assistance. It can be changed or terminated by mutual agreement.

The islands are a wonderful place to visit, and tourism is mainly in the main islands. Points of interest are the ancient stone ruins of Nan Madol on Pohnpei, Leluh on Kosrae; diving the shipwrecks of the Second World War in Chuuk (Truk) Lagoon and the culture with its stone money on Yap. The small outer islands are picture-postcard perfect and, when these photos were taken, could only be reached by ship; only Ulithi had an airstrip. Permission to set foot of the traditional outer islands of Yap had to be obtained from the Council of Tomol, as casual tourism was not allowed. It may be different now, as many islands now have airstrips and apparently tourists do arrive by private yacht. But many young people have been leaving, as jobs barely exist on the small atolls and living the traditional life loses its appeal.