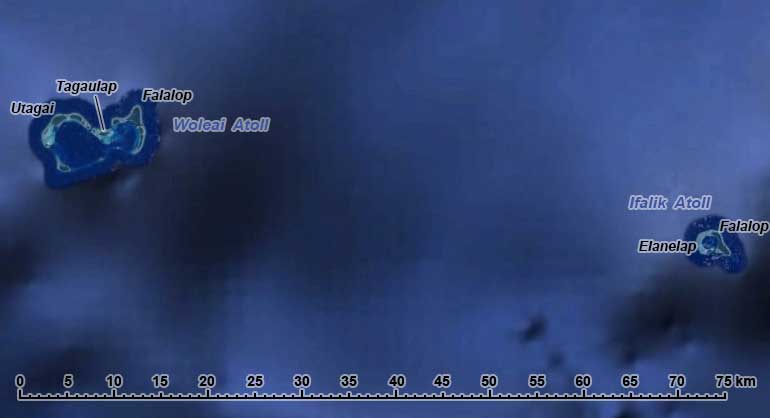 The atolls of Woleai and Ifalik lie about 60 kilometres apart in the eastern Caroline Islands. Woleai is a double atoll, 11.5 kilometres long, with two lagoons. There are 22 islets and the largest, called Woleai (but also Falalop, meaning “big island”) is the main inhabited island, on the northeast side of the atoll. It has a population of around 1,000, now has an airstrip and is home to a Junior High School. Some of the other islands further west, Tagaulap, Saliap and Utagai, are also inhabited.

More...
To see a photo full size, just click on it;
you may then send it as a postcard if you wish.

Woleai is unique as it developed its own script early 20th century; in 1905 a missionary, Alfred Snelling, landed on the island of Eauripik, 115 kilometres southwest of Woleai, with a crew from Chuuk. They then taught the islanders, who speak Woleaian, the Latin script as it had been developed for the Chuukese language. They then developed it into a syllabic script, adding their own interpretations and letters to the Latin letters, ending up with at least 99 glyphs, representing the various syllables. In 1913 another missionary, John Brown, reached Woleai and found the writing system was used there, although only a few people knew it. The syllabary was also taken to Faraulep, 150 kilometres north of Woleai, where the same language is spoken.

In the Second World War Woleai was heavily fortified by the Japanese. In 1944 there were over 6,400 troops stationed here, and there were an airfield and seaplane anchorage. But the Americans never invaded: they relentlessly bombed the military facilities until the middle of 1945, driving the troops underground. By the time of Japan’s surrender, only 1,650 were recovered by the US Navy; the rest had succumbed to starvation and disease. There is now a Japanese monument commemorating soldiers killed, on the island. Bunkers, trucks and even the remains of a Japanese “Betty” bomber can still be found. During the war, the island had been completely levelled. Now it is once again covered in high coconut palms, and copra is produced.

About 60 kilometres east of Woleai is Ifalik (or Ifaluk) atoll, consisting of three islands around a lagoon. The largest, also called Falalop (“big island”) is actually two islands that have grown together to a total length of almost three kilometres. The population would be between 500 and 600 people. Before European contact Ifalik was a “warrior island”: warriors from Ifalik used to attack and raid the outer islands in the region, from Woleai to as far as Poluwat.

A curious carving, the “Phallus of Maur”, is displayed in front of the Fan Nap (the men’s big house) in Rawai village on the island. It refers to an old story about an Ifalik chief, named Moch (or Maur) who lived on Woleai and was married there. He was beaten and left for dead by men who objected to his marriage. He survived and returned home, assembled a fleet of canoes and indicated by his erect penis the directions his warriors had to go to exact vengeance by killing everyone on Woleai except a few who had been chosen to be spared. Another group went to Lamotrek. After the chief’s death, the people carved a large figure of his phallus and placed it in front of the men’s big house, where it was prayed to for protection. Christian converts destroyed it, but a smaller version has been placed here.

Back to Top of the Page