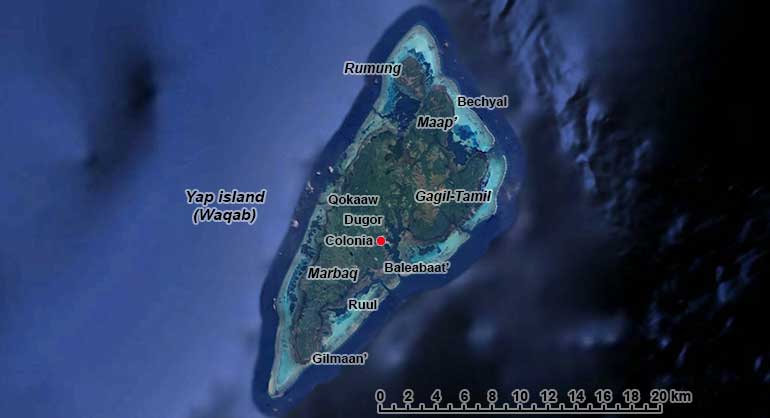 Yap or, in the Yapese language, Wa’ab (now spelled as “Waqab”), is the main island group of the westernmost State with the same name, in the Federated States of Micronesia. The group is made up of four separate islands, separated by narrow channels: Marbaq, Gagil-Tamil, Maap’ and Rumung, surrounded by a common reef. The total area is 308 km² and the population around 11,400. It is the most traditional of the larger Caroline Islands, with its culture very much part of it. The spoken language, Yapese, is now written in a new orthography since 1972 and the modern spelling is used here.

More...
To see a photo full size, just click on it;
you may then send it as a postcard if you wish.

Yap was first sighted by Europeans in the early 16th century when Spanish expeditions came across the islands. In 1565 Spain had claimed sovereignty over it, and it was a Spanish colony within the Captaincy General of the Philippines (the Spanish East Indies). In 1896 there was an uprising on the Philippines against the Spanish. They then used Yap as a prison for those they captured in what became the Tagalog War or the Philippine Revolution. Three years later Yap, with the other former Spanish islands, had been sold to Germany.

The Germans had turned Yap into a significant naval communications centre and cable telegraph station, when Japanese troops occupied it in September 1914. In 1919 it became a Japanese mandated territory under League of Nations supervision. During the Second World War, there was a Japanese garrison on the island, but US forces bypassed it, although they bombed it and at the end of the war it was occupied by American troops. Yap became part of the United Nations-mandated Trust Territory of the Pacific Islands, and since 1986 of the Federated States of Micronesia.

The only town on Yap is Colonia, a name going back to the time the Spanish established a Catholic mission there in 1885. It is the capital of Yap State, with a population of about 3,100. Maedriich, a village, inhabited by people from the outer islands of the State, is just to its south. The other villages have mainly traditional buildings, like the thatched family home (“tabinaew”). The “faeluw” men’s house, built on the shore, used to have a resident female (miispil) who was “married to all men” there; this custom ended about a century ago. The large “p’eebaay” are the village community houses were people come together. There are large stone platforms (“wunbey”) in front of those houses.

Significant still is the stone money, “raay”, large doughnut-shaped disks that were carved from calcite and can be seen along stone paths or the traditional community houses. These come in various sizes, some well over two metres in diameter. Most were quarried in the 19th century on Palau and transported on rafts, towed behind canoes over 400 kilometres of the open sea. This gave the disks its value, and they are still used in ceremonial exchanges. When a piece changes owner, it is not moved, as people know who owns which stone coin.

Back to Top of the Page